Face-Off: Which Facial Rejuvenation Procedure is best for treating the signs of aging?Aesthetics MD Newport Beach

Face-Off: Which Facial Rejuvenation Procedure is best for treating the signs of aging?

Sandy, a 47-year-old patient, walks into the offices at Aesthetics MD in Newport Beach for her plastic surgery consultation with Dr. Mark Anton. There is a mixture of excitement and anxiety on her face as she begins to tell Dr. Anton her reasons for seeking his professional advice and services.

"I look in the mirror, and I don’t see myself anymore. I don’t see the smile that I have always been complimented on – I see the lines around my mouth and eyes that scream ‘middle-aged.’ I don’t see the energy that I feel on the outside. I look so tired all the time, and no matter how rested I feel and how ready to tackle the day I am, my reflection just doesn’t show it. For the past ten years, I have been doing Botox and Juvederm fillers to keep myself looking youthful, but now it seems like these procedures can’t keep up with Mother Nature. I have thought of getting a facelift, but I feel like I am too young for a procedure like that. I’ve always thought those are for women who are in their 60’s. I decided to go visit Dr. Anton on the advice of my hairdresser who has seen his work on her other clients."

Sandy is a typical patient at Anton MD, and her story is not unlike that of many women her age. Women and men have many different reasons for wanting to look younger and more refreshed – from keeping their edge in the workplace to keeping that spring in their step. However, there can sometimes be a stigma around a facelift, especially for women in their forties. It’s not uncommon to see woman like Sandy express hesitation or have reservations about having a facelift. They wonder if they are too young, if everyone will be able to tell, and if there are better, more age appropriate non-surgical options. 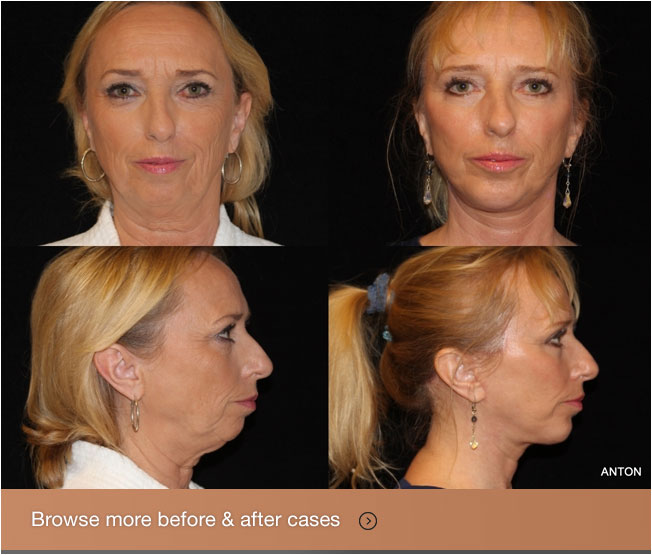 The first step in Sandy’s consultation process is to determine what surgery is best suited for her desired results. In Sandy’s case, she presents with signs of aging that include loose, sagging skin around the jawline and neck, heavy upper eyelids, and some fine lines and wrinkles, especially in her lip and chin area. While Sandy is an ideal candidate for a facelift, Dr. Anton also discusses FaceTite as an option.

FaceTite is a non-incisional procedure that can be done in the office under light sedation or in the OR under general anesthesia. During the FaceTite procedure, a radio frequency (RF) probe is placed beneath the skin to heat and tighten the dermal tissue. FaceTite is not a lift, per say, but it does tighten the skin, stimulate collagen and produce elastic for a lifted appearance. In Sandy’s case, because she was also concerned with looking tired all the time, Dr. Anton recommended an upper blepharoplasty (eyelid surgery), FaceTite and neck liposuction to contour her jawline.

After her exam, Sandy and Dr. Anton move the consult to his office to look at before and after photos of other patients, some who had a facelift and others who opted for FaceTite. The more Sandy sees of other woman in their mid-to-late forties who opted for a facelift, the more comfortable she becomes with the idea. Sandy is surprised to see a video of a patient only one day post-op after facelift surgery with no bruising, no pain, and looking so “normal”. Dr. Anton explains that he lifts the skin using a SMAS (Superficial Muscular Aponeurotic System) technique for a very natural look—not pulled or windblown as some people fear. Many women and often the husbands who accompany them on their consults, express a fear of looking like one of the many bad facelifts that they have seen. Dr. Anton reassures Sandy, “You don’t see the good facelifts. All you see is a more youthful rested appearance.” He also explains that there is no magic age for having a facelift, as each person ages differently. Aging is due to many factors, genetics, sun exposure, and lifestyle including nutrition, stress management, exercise, and sleep. There are benefits, however, to having a facelift at a younger age because the skin is more elastic, recovers more quickly, and results can last longer. Today more women are opting for a facelift in their mid to late forties and then maintaining the results with in-office procedures like Lumecca for collagen and elastin stimulation.

Sandy leaves our offices that day feeling confident in the knowledge she gained from her consultation with Dr. Anton. He spent more than an hour with her explaining both the risks and benefits to a facelift or FaceTite. One of Sandy’s concerns was post-op recovery, which is primarily the same for any surgery. During the first two weeks post-op don’t do anything to raise your heart rate or increase your blood pressure, including exercise of any kind. It is important to honor your body’s healing process by following doctor’s orders, resting, eating a healthy anti-inflammatory diet, hydrating, and avoiding alcohol. Exercise and normal activity resumes between four and six weeks for the average patient.

In the end, Sandy decided the facelift was the best surgery for her. She understood that she could “buy five more years” with the FaceTite, upper eyes and neck liposuction option, but she also knew her expectations and after talking to Dr. Anton at length about them, she realized the facelift would make her the happiest.

"I went back to work after two weeks and everyone commented on how rested I looked after my ‘vacation’. People asked me if I changed my hair or if I had lost weight. My results are so natural that no one suspects I had a facelift, and to be honest, I don’t tell people. I did want to share my story though for other people, like me, who might be looking in the mirror and seeing the signs of aging staring back at them rather than their beautiful smile."

Be In The Know

Exclusive offers, promotions and beauty tips from the experts.